Below is a link to an article written by Benjamin Haas. Mr. Haas is a student at Stanford Law School. He graduated from West Point in 2009 and was an intelligence officer in the Army for five years, including two deployments to Afghanistan. 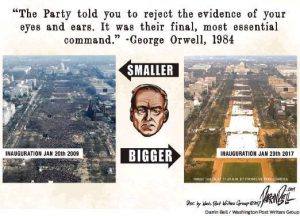 Here are three quotes from Mr. Haas’ article:
“Perhaps Trump actually does have deep knowledge of West Point. But if so, he evidently has not embraced its revered Cadet Honor Code: “A cadet will not lie, cheat, steal or tolerate those who do.” Even in the few days since taking the oath of office, Trump has managed to behave in a manner inconsistent with the code’s tenets.”
“With Trump, the lies abound. In the same speech at the CIA headquarters, Trump uttered several. He grossly misrepresented the size of his inauguration crowd despite contrary photographic evidence, and he falsely portrayed the event’s weather conditions. He also repeated his debunked statement that he did not support the 2003 invasion of Iraq.”
“Also in the CIA speech, Trump reintroduced his campaign idea that the U.S. should have stolen Iraq’s oil because doing so would have prevented the rise of ISIS. Even more alarmingly, he added, “Maybe we’ll have another chance.” This proposed theft has already been discredited as not only a violation of the Geneva Conventions, but also an impractical and dangerous undertaking.”

I doubt our president is the first president to lie to the American public but I am sure he is the first one to lie over such trivial matters (The crowd size? Really?) and then send his people out to justify the lies with “alternative facts”. Now there’s a fine example of lipstick on a pig.

Educator, computer consultant, avid photographer and owner of alwaysangels.com, you are likely to see Bob Caruso walking along the sidewalks of Petaluma. He loves walking around town and sitting by the river at the Apple Box on a sunny day. The name Petaluma Angels refers to the collection of Angels Bob has at Always Angels.